skip to main | skip to sidebar

Although the number of distressed sales nation wide are at 29%; there are some areas where the percentages are higher. Certain locations like California, Nevada and South Florida have higher rates. On checking the residential sold properties for the last 6 months in the Key West MLS there were 231 sales, 114 (49%) were distressed sales (short sale or lender owned).

Looking at how those sales break down, the short sales are on the market much longer then the bank owned properties and sell for a lower percentage of list price. Although there is legislation to make the short sales go faster they are still taking quite long. The Key West MLS currently has 193 pending sales; 139 of them are short sales. In these cases the seller has found a buyer and is waiting for the bank’s decision to approve the sale. It is not uncommon for this to take over a year.

The bank owned properties are usually listed very low to get a quick sale. Often there are multiple offers in a short period of time. Of these multiple offers a strong preference is given to cash offers or buyers putting down large down payments. These type of sales close faster and have a lower risk of failing thus further reducing the amount of time on the market. Because the bank owned properties are listed so low to start with many bids come in substantially over the asking price. Overall residential sales in Key West sell for 92.66% of list price for lender owned properties that percentage jumps to 96.77%.

With the distressed sales come much lower prices. Because of this, the number of sales are up with investors and first time home buyers jumping at the chances to take advantage of this opportunity.
Posted by Joanne Tarantino at 5:34 PM No comments:

I Break for Iguanas 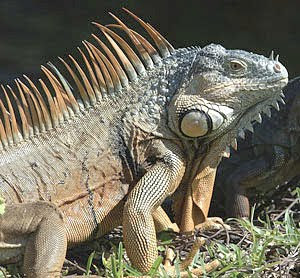 I was driving down College Rd today and an Iguana began to run across the street. He was about ½ way, saw another automobile coming towards us and turned around running back in front of my car! I slammed on the breaks. As I calmed down and headed back to my office I wondered about this. I would die if I ever hit a cat, a dog, a chicken or raccoon but I realized I would not mind too much if I ran over an Iguana. I would not try to run over one, but I think that they are pretty high on the list of desirable road kill.
I had nothing against these reptiles until they took over South Florida and the Lower Keys. It's like cruise ships; some are ok, but you don't want the harbor thick with them. Iguanas are more fun to look at in a zoo then lounging at my pool in between servings of Hibiscus (they prefer red). We have so many because they were bought as pets and then the owners decided they did not want them. Duh, they are scaly cold blooded animals with beady eyes, sharp claws and rows of horns. They grow up to 6 feet long and have to be kept under heat lamps in captivity. I forgot to mention that the little ones eat the bigger ones dung so they can get the bacteria needed to digest plants. If I was dumb enough to get one I would be even dumber not to want to get rid of one.
Be this as it may the local SPCA says that they accept iguanas, not to find them a new home but to euthanatize them. You can kill them yourself but it must be humane. If you shoot them with an air gun you need to be good and kill them with just one shot. Otherwise, it is considered inhumane. As for me I am still going to break for Iguanas. The road kill thing is just too messy.
Posted by Joanne Tarantino at 7:12 PM No comments: 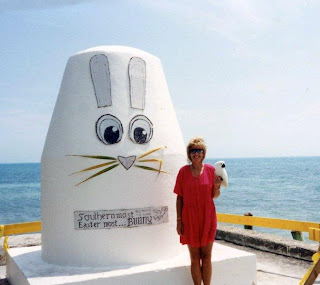 It was in the newspaper recently that the Southernmost Point Buoy is going to get repainted. I was kind of curious if they had two and switched them out. I thought I saw one over in the welding yard on Amelia and Simonton St. a while back. It turns out that was probably the temporary buoy that was made during the time the street and side walk where the buoy sits had been cordoned off to be redone. A temporary one was erected several feet away for photo opportunities. What happened to the life size Seward Johnson sculpture of the tourist family taking pictures that used to be at the Southernmost Point? I think I saw them in that same Amelia St. welding yard. Both are gone now.
Any way the buoy that is there is never moved. I am told that the buoy is solid concrete and the only way that it will be moved will be after it is broken up with a sledge hammer and shoveled away. This is probably a good thing. The buoy was erected in 1983 to replace the signs that were constantly being stolen. It costs $4,000 to paint the buoy and it was last done in December 2008. Do you know that as I went around the corner recently there was actually a long line of people waiting to take their pictures in front of the monument? Don't tell them it is not really the southernmost point. The back yards of the homes directly to the East and the Navy base to the west are both further south. Both Fort Zachary Taylor State Park and Ballast Key, a private island are also further south. 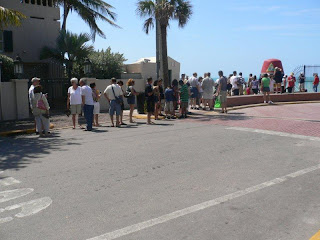 Don't they put a Christmas tree up there at Christmas? I cannot remember. I was told that they never decorate it. I happen to know that is wrong. It was once the Easter Bunny. In about 1996 they were re-painting at this time of year. The buoy had been sanded and primed and it became the Easter Bunny before it was a buoy again. And what is wrong with that? If you can believe in the Easter Bunny you can believe that the buoy is the southernmost point. It's all fun.
Posted by Joanne Tarantino at 3:58 AM No comments:

Joanne Tarantino
Key West, Florida, United States
Whether you live in Key West or the Lower Keys already or are thinking about moving to our islands from some other location, I can help you find the perfect home or sell your existing one. With over 20 years of Real Estate experience, you can feel confident in knowing that your Real Estate agent is a certified residential specialist and a award winning top sales broker associate / Realtor®. Whether you are buying or selling, my team and I stay up to date with the latest technology and advertising strategies to provide the highest quality of service possible. I specialize in waterfront and luxury homes and condos in Key West and the Florida Keys, including Old Town, Truman Annex , New Town, Stock Island, Key Haven, Big Coppitt, Shark Key, Saddlebunch, Sugarloaf and Cudjoe Key.