skip to main | skip to sidebar

Garfied Eat Your Heart Out

Bone Island will throw the dogs a bone. Dogs are almost allowed back into the restaurants and bars. I don’t own a dog but it seem

s only right that those establishments that have been allowing it for years are not allowed to continue. We have almost finished the dog days of summer with no dogs. The City Commission approved it on August 20, but now has to wait 45 days for the DCA (The State) to give its stamp of approval.
These dogs deserve it. They have always done their part in Key West. They wear sunglasses while singing on Duval St. Little dachshunds march in the Duval St. New Years parade (it’s a short parade because of the l 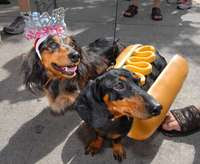 ength of their legs). Dogs ride on mopeds. They are strong supporters of Dog Park and Dog Beach. If they did not who would? You’ll never see a cat chasing a Frisbee or running in the surf. Through out the years dogs have made some extremely strong performances in the Fantasy Fest Pet Parade. Many are required to look like their master, which they do with much admired patience dignity.
I personally look forward to when they are officially welcomed back. One word of warning; the ordinance prohibits dogs from sitting on bar stools.
Posted by Joanne Tarantino at 4:45 PM No comments:

Joanne Tarantino
Key West, Florida, United States
Whether you live in Key West or the Lower Keys already or are thinking about moving to our islands from some other location, I can help you find the perfect home or sell your existing one. With over 20 years of Real Estate experience, you can feel confident in knowing that your Real Estate agent is a certified residential specialist and a award winning top sales broker associate / Realtor®. Whether you are buying or selling, my team and I stay up to date with the latest technology and advertising strategies to provide the highest quality of service possible. I specialize in waterfront and luxury homes and condos in Key West and the Florida Keys, including Old Town, Truman Annex , New Town, Stock Island, Key Haven, Big Coppitt, Shark Key, Saddlebunch, Sugarloaf and Cudjoe Key.